Fingertip spinning tops are popular all over the world, they can relieve stress and relax the spirit, but these spinning tops are very heavy for children. Today, Alpha Science Classroom decided to make some small changes to them. Use simple paper to teach children DIY origami fingertip spinners. I hope that through this children's physical science experiment activity, children can understand why the spinner rotates. At the same time, learn the power of torque through this fun and magical kid's science experiment project.

Alpha science classroom warns： Be careful when using hot equipment. Parental supervision was carried out during the bonding phase of this project.

Step 1:  children take 2 sheets of paper. Use different colors to get a more whimsical look. Then fold the paper in half, fold a crease, and then unfold it.

Step 2:  children tear off two sheets of each paper along this crease. Put one set aside, work with the others first, and then fold it lengthwise to get 2 lean meat pieces

Step 3:  children fold the paper again, crease, and then unfold, fold the top of the pink part to the left and the blue part to the right. Use the previous middle fold as a guide.

Step 4: Children fold the lower part of the pink part to the right and the blue part to the left. It is best to turn the two pieces over.

Step 5: For the pink part, fold the bottom square to the upper right corner. For the blue part, fold it to the left corner.

Step 6: For the pink part, the children fold the top triangle inward and to the left. For the blue part, crease to the right and inward, and then expand steps 11 and 12. Turn the blue part over. 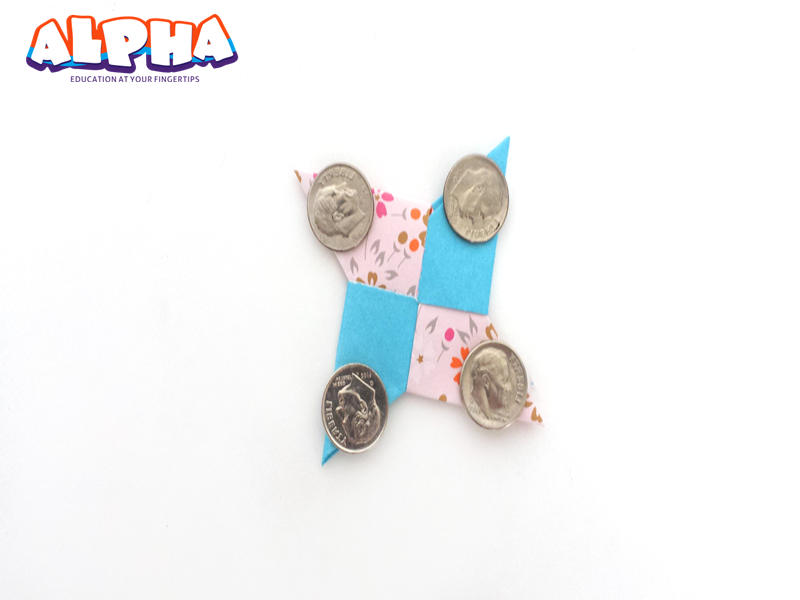 Step 7:  children put the blue part in the center of the pink, and insert the upper right flap of the pink piece on the left into the upper triangle of the blue piece.

Step 9:  children stuff the bottom flap of the blue part into the middle. You created the first part of the spinner! It’s best to poke a hole in the middle with a pushpin.

Step 10: children need to repeat steps 4-19 to make the other half of the spinner. Once you have two sides, use a hot glue gun to glue a four-dime coin on the edge of the origami half.

Step 11:  children carefully apply glue on the top of the coin, and then glue the upper part of the origami spinner.

Step 12:  Children need to bend the paper clip carefully so that it is straight in the middle. Pass it through the hole you poke.

Press the end to create a finger grip. Flick your spinner and watch colors dance in the air! Kids can try different objects glued to the ends and other papers!

Alpha science classroom tells the children that once the fingertip top starts to rotate, it will act like a gyroscope, generating torque around the axis of rotation of the gyroscope. Torque is a force generated by the rotational movement of an object. If you look down at your fingertip spinning top and rotate it counterclockwise, the torque generated will push the spinning top towards you. After rotating it, try to rotate the spinner in different directions to see if you can feel the resulting torque.

There are two reasons for the continuous spinning of the fingertip top. First, many fingertip tops have a ball bearing in their center, and the rest of the spinner rotates around it. Ball bearings use many small metal balls to reduce the friction between the shaft (the center of the bearing) and the object rotating around it (the rotator). Rolling objects produce less friction than sliding objects, so ball bearings allow the fingertip top to "roll" around its central axis instead of sliding around that axis.

The children's DIY spinner does not have ball bearings to reduce friction around its axis (paper clips), but it does have the second key feature of a good fingertip spinner: a large amount of rotational inertia. Inertia refers to the resistance of an object to any changes in its motion. The four symmetrically distributed coins in the top of the fingertip give the outside of the spinner a lot of inertia, so once it starts to spin, it will strongly resist deceleration. By reducing friction and increasing the moment of inertia, the fingertip top will continue to rotate for a while.

The gyroscope starts to choose under the action of force. Children can see the color of its rotation. Children can use their imagination to draw on paper. Re-DIY paper fingertip tops and give them to your best partner. Witness this scientific miracle! The children are having fun and enjoying the magic of kid's science experiments. I believe they must be very happy. Pay more attention to us and explore more magical science together!