Have the children watched the train pass by? The children must be curious and want to know how the train can stay on the track. The secret lies in the wheels of the train. Although they are cylindrical at first glance, when you look closely, you will find that they have a slightly semi-conical shape. This special geometric shape keeps the train on track. Today, the alpha science classroom passes the Train Wheel Science experiment to test different wheel shapes with children to find out why the cone wheel is superior to other designs. At the same time, in this children's physical science experiment activity, children learn the physical knowledge contained therein, and at the same time enjoy the fun brought by the kid's science experiments activity, explore different knowledge, and grow up in happiness.

Warning: Children should never get close to running trains and railroad tracks!

Step 1: First, the children take two cups and glue them together with the bottoms facing each other. This is your first cup setting.

Step 2: The children picked up the other two cups and taped them together with the tops facing each other. This is your second cup setting.

Step 3: Children use two rulers or rulers and your book or box to set up a model railway track. Place the ruler parallel to one side of the book, and place the other side on the workbench to form a slope. Stand the ruler on both sides with the long and narrow side facing up so you can install each cup setting on the rail. Secure the ruler firmly in place with tape.

Step 4: The children carefully set the first cup across the track at the top of the slope. Try to place it as close to the center as possible.

Step 5: The children let go of the cup setting and let it roll down the track. Repeat this step several times and observe what happens with each cup setting on the track.

Step 6: The children set the second cup on the track. Try again to place it in the center of the track. Let the cup set roll down along the track.

Step 7: The children repeat this step several times, and then observe what happens each time. 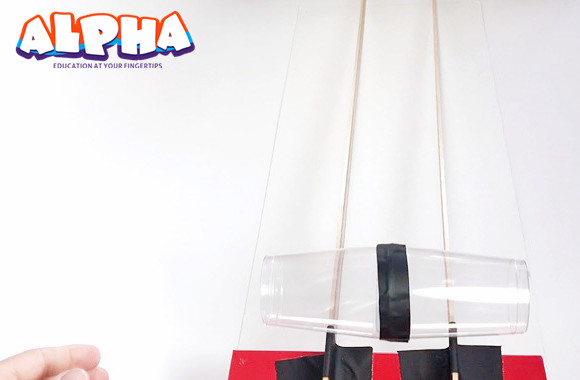 Step 8: The children set the first cup again and put it on the track. Put it there eccentrically this time. Move it slightly to the left or right, let go of the cup setting, and let it roll down the track.

Step 9: The children set up the second cup and put it on the track. Again, place it slightly off-center on the left or right side.

Step 10: The children let the cup set roll down along the track, what do you observe? Can you explain your observation?

The alpha science classroom tells the children that different cup settings represent the possibility of different train wheel shapes. Both cup settings represent a set of tilted train wheels, but the wheels are tilted in the opposite direction. In the first set, the outer side of the wheel has a larger diameter, while in the second set the opposite is true. As you might have observed, the wheel design has a huge impact on the wheel’s behavior on the track.

It can be difficult to keep the first cup assembly going properly. It should derail almost every time before reaching the end of the track. No matter how you place the cups, they can usually fall off the track. The component can only maintain normal operation when it is fully centered. But this is almost impossible to achieve. Once the setting is slightly off-center, it will derail during the downward slope. When you eccentric the component to the left, the circumference of the cup part on the left rail is smaller than the circumference of the cup part on the right rail. Therefore, the left wheel of the train is smaller than the right wheel of the train. As a result, the entire assembly may turn farther to the left—in the direction of the smaller circumferential wheel—and eventually fall off the track. If you eccentric the assembly to the right, the situation may be just the opposite.

However, the second set should remain on track-even if you deviate from its center. When you decenter this setting to the left, the part of the cup on the left rail becomes larger than the part on the right rail. In this case, the left wheel of the train is larger than the right wheel of the train. As a result, the assembly may turn to the right and correct its position to a position closer to the center of the track. Whenever this wheel is set off-center, it will automatically correct its course to the center, which makes it a very stable system.

The same principles you observe on slopes also help keep the wheels on track when the train turns. When the train is pushed sideways during a turn, the wheel size changes, so the outer wheel (larger) can move a greater distance than the inner wheel (smaller). In this way, the outer wheel can cover more distance while rotating at the same speed.

Similarly, Alpha Science Toys has also prepared many children's physics science experiment kits for children. Various physical phenomena are displayed in front of the children, waiting for them to solve the scientific mysteries one by one and grow into the most powerful physics. family.

EXW-Up to 40% Off-Detective Training Camp
If you want to be a qualified detective, you should have sharp observations, careful thinking, extensive knowledge, strong psychological quality and so on. This science toy aims to training all the various skills. After finishing the training, you will be a real small detective. Now, you can try to be a small detective in this science toy to explore some unknown secrets.
SEND US A MESSAGE
QUICK LINK
OUR FACTORY
BRAND SERIES
PRODUCT CATALOGUE
CERTIFICATION
QUALITY CONTROL
PRIVACY POLICY
ALPHA SCIENCE EDUCATIONAL TOYS FACTORY
CONTACT US
Tel:+86-13223745050
Email:alphatoysfactory@gmail.com
Manufacturer:XinXiang Alpha Manufacturing Ltd
Address: West Of Bei Hean Road, Muye District,
Xin xiangCity,He Nan Province,China,Post Code 453000
INQUIRY