What's the magic of potatoes and straws together? Did children know that potatoes and straws can also spark science? Today, Alpha Science Classroom teaches children how to make Straw Potato, and together we will learn about the scientific mystery of air pressure and enjoy the wonderful fun of kid's science experiments through this children's physical science experiment project.

Step 1: First, the children gather the materials they need in the kitchen.

Step 2: Children can hold the potato in their non-dominant hand (the one you don't use to write) and try to put a straw through it. What's the result? The straw bends and crumples! 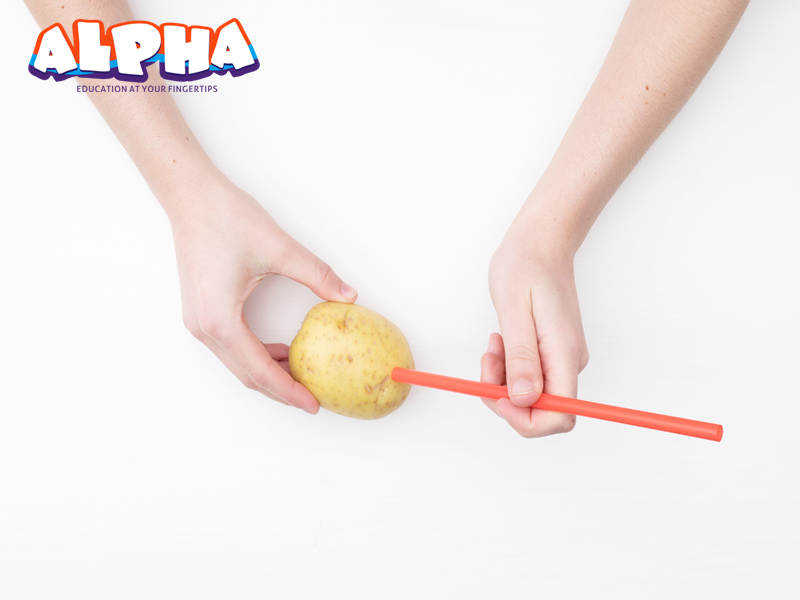 Step 3: Now the children cover the top of the straw with their thumbs. Put the potato on one end and try to insert the straw into the other end.

Alpha Science Classroom Tip: After step 2, we cut the bent part of the straw off!

Step 4：What happened? Did the potato get penetrated?

How do you turn a fragile straw into something strong enough to go through a potato? It's like turning flexible rubber into a strong car tire, or a bulky jack into a concrete breaker，use air pressure! This is important.

One of the neat things about gases (like air) is that when they are compressed, they transfer the pressure of that compression into the container. The compressed gas enters less space, so the gas bounces faster and harder in its container. If you've ever squeezed a balloon and seen it expand, then you've seen air pressure at work. In this experiment, when you put a straw into a potato, the air in the straw will be squashed (and pressurized). The squashed air is pushed out the side of the straw to prevent it from bending - that's the power of air pressure!