Step 1: First, the children cut a 3-inch straw. Then trace the opening of the jar on the cardboard and cut out the resulting circle.

Step 2: children trace the opening of the jar on a piece of cardboard. Then make a hole in the center of the circle, the size of the hole is large enough for the straw to pass through.

Step 3: children are careful to use scissors to punch a hole in the center of the cardboard circle. Then insert the straw into the hole and fix it firmly with hot glue.

Step 4: A person applies hot glue around a straw, which passes through the hole in the cardboard circle.

Step 5: Cut the straight part from the metal hanger. Use pliers to twist one end of the wire into a spiral.

Step 6: Children use metal wire to form spiral-shaped pliers, insert the straight end of the wire into the straw, and make a small hook on the other end of the wire.

Step 7:  children carefully pass the metal wire through the cardboard circle, one end is a spiral, the other end is a hook.

Step 8: Cut out two drop-shaped aluminum pieces, about 1-2 inches long. On the top of them, cut a small hole.

Step 9: Two teardrop-shaped aluminum sheets with a small hole on the top, flatten the two aluminum sheets and hang them on the hooks of the wires. Make sure they touch each other.

Step 10: Put the wire with an aluminum sheet into the can, and then use electrical tape to stick the lid on the can. Now you have completed the construction of the electroscope!Homemade electroscope with tape cover. 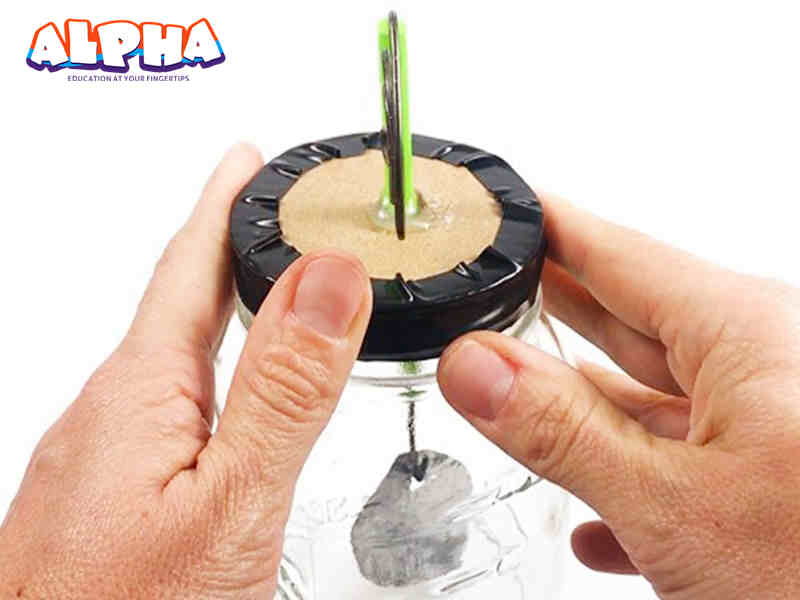 Step 11: In order to test the children’s electroscope, generate some static electricity by rubbing the styrofoam on a piece of wool. Rub the styrofoam with wool several times.

Step 12: children hold a piece of Styrofoam and rub it on a piece of wool.

Quickly bring the charged styrofoam close to the coiled part of the metal wire on the electroscope. Be sure not to touch the wires! Observe what happens to the aluminum sheet inside the electroscope.

Step 14:  children recharged by rubbing the styrofoam on the wool, this time touching the metal coil with the charged styrofoam. Then remove the Styrofoam from the coil.

Finally: Repeat steps 1-5 to test for static electricity in other materials. For each material, observe the changes in the aluminum foil inside the electroscope.

The alpha science classroom tells children that static electricity is the accumulation of electric charges on objects. This charge may discharge suddenly (for example, when a flash of lightning strikes the sky), or it may cause two objects to attract each other. Socks that have just been taken out of the dryer and glued together are a good example of this attraction. Specifically, electrostatic adsorption is the attraction between two objects with opposite charges, one positive and negative.

Static electricity can be generated by friction, such as rubbing one object against another. This is because tribal-negative charges (called electrons) are released, which can then be transferred between objects to generate static charges. Depending on whether the object loses or gains electrons due to electron transfer, the charge of the object becomes positive (the object loses electrons) or negative (the object gains electrons). For example, when you drag your feet on a carpet, electrons are transferred to you, accumulating negative static charges on your skin. When you touch a friend or certain objects, you may suddenly release static electricity as an electric shock.