You are here: Home » News » Science Classroom » Alpha SCIENCE classroom: How To Make A Newton’s Cradle

Alpha SCIENCE classroom: How To Make A Newton’s Cradle

Alpha science classroom: how to make a newton’s cradle material

Alpha science classroom: How to make a newton's cradle Instructions

Step 1: children need to use 4 crafts of glue to stick together at the corners to form a square. Repeat with 4 more craft sticks. Let dry. These will be the sides of the frame.

Step 2: children cut the rope into 6 equal lengths about 8 inches.

Step 4: children will make 6 marks along the two craft rods every ½ inch. Children need to make sure that the marker is in the center of the stick.

Step 5: children glue one end of the rope with marbles to a craft stick at each mark. Set aside.

Step 6: Children need to use hot glue to assemble the frame. Take the craft rods on both sides and hot glue perpendicular to each corner. The last frame will be a cube. 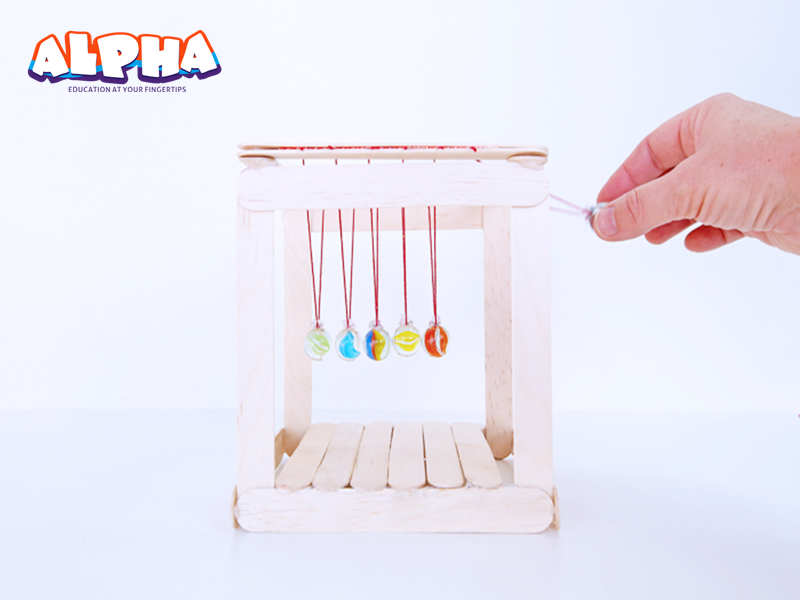 Step 7: The children glue the craft stick with tape/marble to one side of the frame.

Step 8: The children glue the second marked craft stick to the other side of the frame.

Step 9: Children need to glue the loose end of each rope with marbles attached to the marked craft rod. Pull the strings slightly to make sure the cables are aligned. The marbles must be aligned horizontally and when viewed from the top.

The Alpha Science Classroom tells the children that Newton’s cradle is a toy named after the famous scientist Sir Isaac Newton. It shows a scientific idea called momentum. Momentum is the force when an object moves. When the children swing a marble last, it will collide with the marble next to it, and the force of the collision will pass through every other marble until it reaches the last marble that swings upward. When that marble swings downward, the force passes through the marble again. Read more about momentum and collisions here.

The Alpha Science Classroom believes that this is proof of a scientific principle called conservation of momentum. The principle states that when two objects collide, their momentum before the collision is equal to their momentum after the collision. In Newton's cradle, the collision force passes through each ball until it reaches the last ball that swings upward.

Momentum is also directly related to the mass of the object: momentum = mass * speed

Alpha science toys have created a world of educational toys for kids and prepared many interesting physical experiments. So they can learn more physical knowledge to be the next great “Newton” happily.