Step 2: Children wrap the cups in wrapping paper for decoration.

Step 3: Children poke a hole in the middle of the bottom of the cup. This hole should be large enough for the tights to pass through. 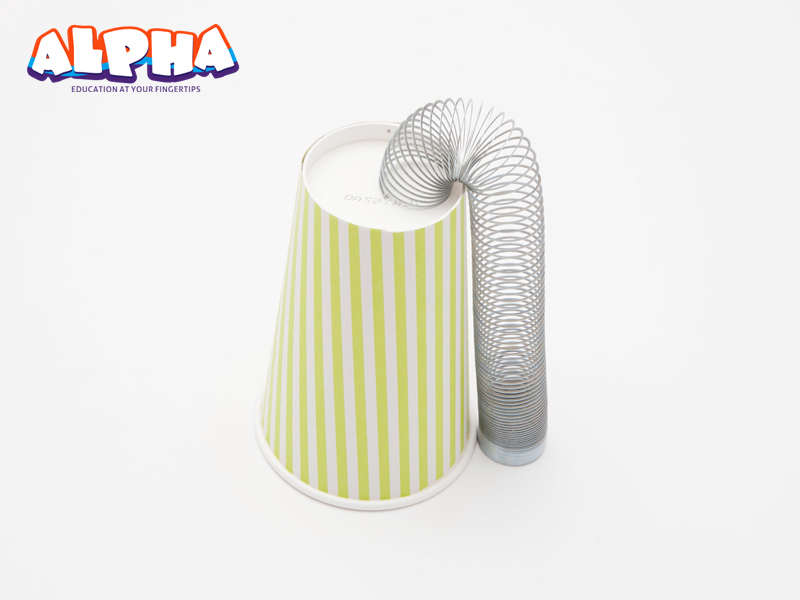 Step 4: Children carefully push the end of the tights up through the hole in the bottom of the cup, leaving about three spirals in the cup and the rest of the tights hanging at the bottom.

Step 5: Children must hold the cup tightly and let the tights bounce up and down. Do you hear it? What kind of sound does it make?

Try more: Experiment further with the plastic tights. Does it make the same sound as the metal tights? Try to let the bottom of the tights touch the ground. Does it make a different or more pronounced sound?

Alpha Science Classroom: The Science Behind the Sound Effects of DIY Slinky Cup

Alpha Science Classroom would like to ask the kids if they have ever thought "Pew! Seat!" How do the laser sounds in Star Wars and other sci-fi movies come about? No, they're not really lasers. The sound engineers who create those transcendent sounds actually use a very rudimentary technique: they flick a thin wire.

Slinky Cup (and solids in general) transmit sound. You usually think of sound as vibrations in the air, but the air isn't the most important part - the vibrations are. As long as a solid can shake and vibrate, sound can pass through it just like air. That's why if you put your ear to the ground, you can hear a train coming from a distance. If the vibration in a solid is strong enough (or amplified by something, like a cup), it will also vibrate the air and you will hear it normally

However, the strange thing about sounds in solids is that different parts of the sound pass through them at different speeds. The treble part moves very fast in a solid, while the bass part moves very slowly. So when you play the slinky, the high part of the sound being played reaches your ears first, followed by the low and low parts. It sounds a bit like someone running their fingers super fast on a piano keyboard.

Tights and wires are a good proof of this because they are very long (allowing more time and space to separate sounds) and they are good at spreading vibrations. Find out what the splitting sounds are with this acoustic project!

The children's DIY Slinky Cups made special sounds and the children learned about the science involved. In this way, Alpha Science Classroom's physical science experiment for children was a great success, and Alpha Science Classroom hopes that this kid's science experiments project will open the door for children to explore the world of science and help them become the smartest scientists.