The reason why a submarine can navigate freely in the deep sea is because of its strong kinetic energy. So, do children want to know the magical secrets of submarines? Today, Alpha Science Class teaches children to DIY plastic bottle submarines through some simple kid's science experiments and introduces the hidden knowledge of physical science experiments to the children, so that they can feel the charm and interest of science.

Step 1: First, children use pushpins to carefully make a hole in the center of the bottom of the bottle.

alpha science classroom tips：To fix the end of the paperclip, we drilled a second hole in the bottom of the bottle and then pushed the paperclip back into the bottle.

Step 3: children draw a four-blade propeller on a piece of paper and cut it out. This will be your template.

Step 4: Using your template, the children trace the propeller to the lid of the yogurt container.

Step 6: Then, children use a heat gun to make the plastic more flexible. Then, bend each blade of the propeller so that the sharp edge is slightly raised.

Step 8: The children straighten the second paperclip except for one hook. Then, push it into the hole on the bottle cap so that the hook is under the cap. 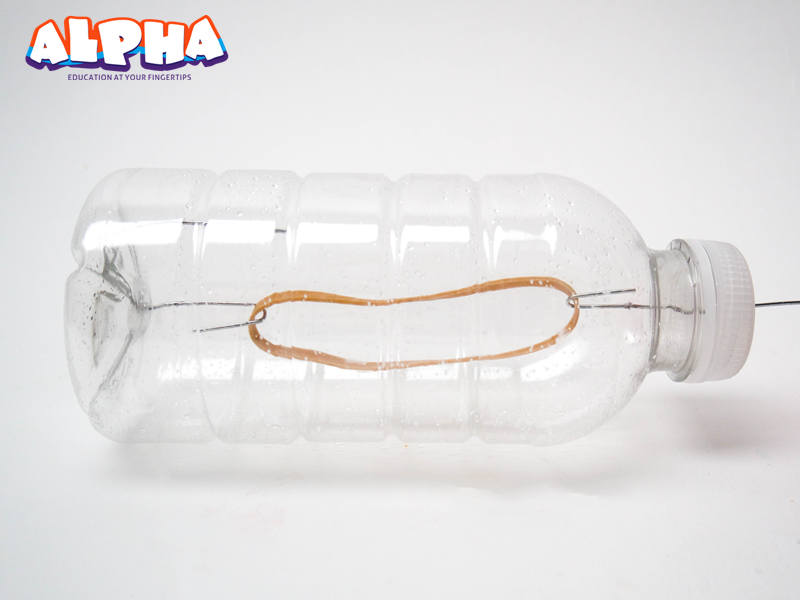 Step 10: children slide the propeller onto the paper clip so that it is flush with the top of the bottle. Then, bend the paper clip to hold it in place.

Step 11: children hot glue the pennies to the ends of the popsicle sticks.

Step 12: children use the last 2 rubber bands to tie the popsicle stick to the bottle near the bottom. This will be the fin of your submarine.

The final launching ceremony, now you can start experimenting with your submarine! Fill the basin with water, roll up your submarine, put it in the water, and let go! Allowing more or less water to enter the bottle will determine whether your submarine floats to the top of the bathtub or sinks to the bottom. Try to make it float in the middle of the bathtub!

In order to stay upright when moving underwater, submarines also use various fins, just like the fins on water bottle submarines. Real submarines can move their fins, along with ballast tanks and propellers, and can move in almost any direction.

Alpha Science Toys also prepares many magical physical science experiment kits for children, helping children to explore scientific phenomena full of magic and fun, and realizing their dreams of being a scientist.