Scientists study earthquakes, a natural disaster so that we can better understand and predict earthquakes. In the kid's science experiment activities in the alpha science classroom, use simple materials and children to DIY a simple seismograph together, and through this simple activity, learn about earth and environmental science and become an environmental scientist.

Step 1: The children carefully cut off the lid or flip the lid from the cardboard box. Stand the box on one of the smaller sides. Carefully poke two holes facing each other near the edge of the cup.

Step 2: The children tie a rope (slightly longer than the length of the box) to each hole. Carefully poke two holes in the top of the box (make the distance between them and the holes in the cup equal).

Step 3: The children push the two strings through the holes of the box, and then tie them to the top of the box so that the cup hangs inside the box. The bottom of the cup should be about one inch higher than the bottom of the box. 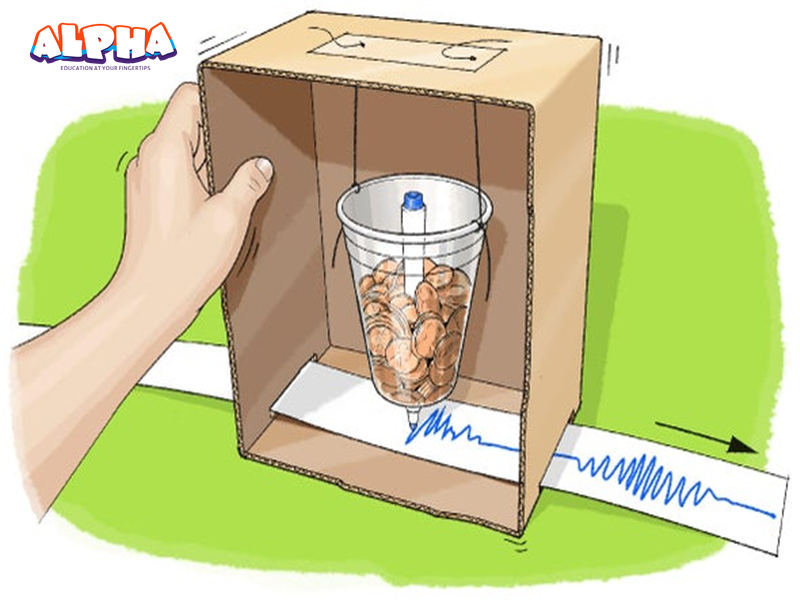 Step 4: The children fill the cups with coins or other small weight cups. Then fold a piece of paper lengthwise, and then fold it in half. Unfold the paper, then cut along the crease to form four equal-sized strips. Connect the paper strips end to end to form a long strip. (If the printed receipt is very long, you can skip this step)

Step 5: Carefully cut two slits on opposite sides of the cardboard box, as close to the bottom edge as possible. The gap should be wide enough to allow the strip of paper to pass through the middle of the box and through the other side of the box.

Make sure the mark is centered on the paper tape. Children may need to poke different holes in the top of the box and re-suspend the cup if necessary.

Alpha Science Classroom: The start of the DIY seismograph test

Now, children can finally use the seismograph! Please stabilize the box with your hands when the children gradually start to slowly pull the strip of paper from side to side. What did the marker draw on the paper?

Pause the shaking for a few seconds, and then try to shake the box again.

Pause for a few more seconds, then gently shake the box.

Pull the strip of paper completely out of the box and take a look. Can the kids tell me how difficult it is to shake the line-based box? Can the children tell when the box hasn't moved?

In addition: Can children design their own scales to measure the intensity of the "earthquake"? Try using graph paper to see how to measure varying degrees of vibration on the scale.

Tell the kids in the alpha science classroom. When the children pull the paper through the box without shaking, the marker should draw a straight line on the paper. When the box is shaken, it moves back and forth, and the paper also moves with it. Because the cup is heavy and the way it hangs on the rope is troublesome. This means that the paper moves back and forth on the (mainly) stationary marker, forming wavy lines. The size of these waveforms (called amplitude) corresponds to how hard you shake the box, just as the lines drawn by a real seismograph correspond to the intensity of an earthquake.

Today's alpha science classroom class was over, the children can take out the made seismograph to test quickly, hope children can pass this simple kid's science experiments, earth, and environmental science knowledge, let the children learn the elements of the earthquake when the children met the disaster, can better protect themselves, happy and healthy life.