Have the kids ever ridden the merry-go-round on the playground? Have you ever noticed how you feel like you're being thrown outside so you need to hold on to stay in place? Why is that? Today, alpha science classroom teaches kids to DIY a bottle centrifuge, explaining the principle of centripetal force through this basic children's physical science experiment activity. Help children learn and grow through fun-filled kids science experiments .

Step 1: The children empty the plastic bottle, poke a hole in the middle of one side of the bottle with a pushpin, and then poke another hole on the other side.

Step 3: The children insert the straw into the hole so that it passes through the inside of the bottle and extends from both ends. If you are using a bendable straw, cut off the bendable part.

Step 4: The children use straws to pass through the two holes on the side of the bottle.

Step 5: The children use a hot glue gun to glue the straws in place and seal the gaps around the holes. Be careful not to burn yourself with hot glue! Can ask parents to help 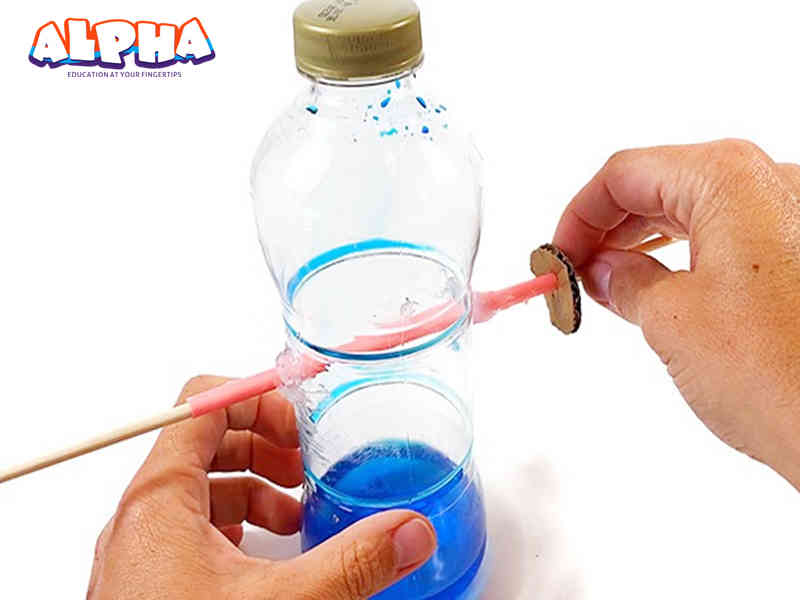 Step 6: The children hold a glue gun and apply glue to a straw inserted into the side of the plastic bottle. Let the glue dry. Then pour a little water into the bottle to test whether the seal is leaking. If they do leak, add more hot glue to close the gap until they no longer leak.

Step 7: The children pour a few tablespoons (Tbsp.) of water into the bottle. Add a few drops of food coloring to the water, close the bottle tightly and mix to obtain a plastic bottle with some colored water.

Step 8: The children put the wooden skewer through the straw. Then use a fork to poke a hole in the middle of the small cardboard and push the cardboard all the way to the end of the straw.

Step 9: The children use a plastic bottle with some colored water, and a straw passes through the two holes on the side of the bottle. A wooden skewer is inserted into the straw.

When you lift the bottle into the air with a skewer, what do you notice about the colored water in the bottle?

Step 11: The children hold the assembled bottle centrifuge in their hands.

While still holding the skewers with one hand, gently push the bottle with the other hand so that it starts to rotate around the skewers. Observe the water in the bottle as it rotates.

What about the water in the bottle?

Stop the rotation of the bottle, and then push the bottle hard. You can also push several times in a row to make the bottle spin very fast.

What happens when the bottle spins faster? Have you noticed any difference compared to when you pushed it lightly?

Stop the bottle again. Then add a few tablespoons of soil or clay to the water in the bottle and mix.

What do you notice when you add soil or clay to water?

The alpha science classroom tells children that according to Newton's first law of motion unless an external force is applied, the object must either remain stationary or continue to move in a straight line. In order to make an object move along a circular path, it must be subjected to a force directed to the center of the circle, called centripetal force.

When the children rotate the bottle, the liquid and particles in the plastic bottle have the same effect. Heavier soil or clay molecules have greater inertia (tend to keep moving in a straight line) and therefore require greater centripetal force to make them move in a circle. This causes them to be "flung" to the outside of the bottle, but the wall of the plastic bottle exerts a centripetal force and makes them move in a circle. Lighter water molecules have less inertia, so it is easier to make them move in a circle-they are not thrown out as hard as soil particles. This leads to the separation of soil particles or soil and water, with soil on the outside and water on the inside.

If you just mix two substances with different densities, they will eventually separate by themselves due to gravity. However, this process can be very slow, especially when the densities of the two substances are similar. A centrifuge can speed up this process significantly. Scientists often use centrifuges in the laboratory to separate one compound or biological substance from another.

The children's DIY bottle centrifuge tells us the force of centripetal force during rotation. This children's physical science experiment has given children a lot of inspiration. Help children explore more interesting kid's science experiments activities, use their imagination, and unlock more scientific mysteries about centripetal force. This is the hope of Alpha Science.

Alpha Science Toys has also prepared many interesting suits for children's physical science experiments, allowing children to have more fun in exploring the world of physical science and grow into the next Newton happily!