Alpha science toys think most people feel the bacteria should be cleaned up that are unhealthy. But bacteria are everywhere. By saying that bacteria are everywhere, Alpha thinks that we are surrounded by them. In fact, people can’t live without bacteria, because bacteria play an important role in human life. For example, bacteria can break down carbohydrates in the gut and Stimulates the human immune system.

Alpha science classroom does a simple science experiments for kids about bacterial growth with children and finds the bacteria hidden around us.

While most environmental bacteria are not harmful to healthy individuals, once concentrated in colonies, they can be hazardous. To minimize risk, wear disposable gloves while handling bacteria, and thoroughly wash your hands before and after. Never eat or drink during bacteria studies, nor inhale or ingest growing cultures. Work in a draft-free room and reduce airflow as much as possible. Keep Petri dishes with cultured mediums closed preferably taped shut unless sampling or disinfecting. Even then, remove the petri dish only enough to insert your implement or cover medium with bleach or 70% isopropyl alcohol. When finished experimenting, seal dishes in a plastic bag and dispose of. Cover accidental breaks or spills with bleach or alcohol for 10 minutes, then carefully sweep up, seal in a plastic bag, and discard. 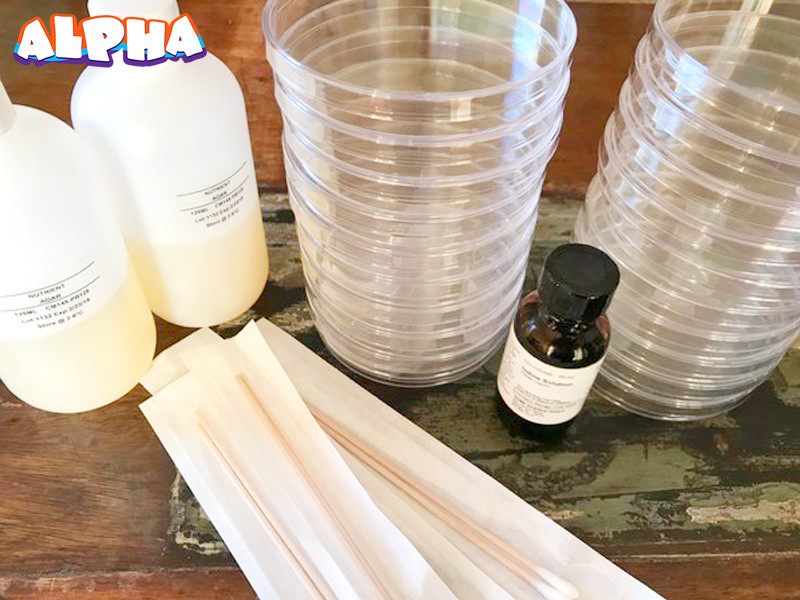 1. Two (or more) plastic Petri dishes are required for each experiment

6. Pen and paper, record the growth of bacteria

8. A 125-milliliter bottle of nutrient AGAR

Loosen the agar bottle cap, but do not remove it completely. Place the bottle in hot water at 170-190 °F until all of the agar is liquid. To prevent the bottle from tipping, keep the water level even with the agar level.

Alpha science classroom tells the children, Let the agar cool to 110-120 °F (when the bottle still feels warm but not too hot to touch) before pouring into Petri dishes.

Slide open the cover of the petri dish just enough to pour agar into the dish. Pour enough agar to cover 1/2 to 2/3 of the bottom of the dish (about 10-13ml). Don’t let the bottle mouth touch the dish. Cover the dish immediately to prevent contamination and tilt it back and forth gently until the agar coats the entire bottom of the dish. (Fill as many dishes as you have agar for: you can store extras upside down until you’re ready to use them.)Let the Petri dishes stand one hour for the agar to solidify before using them.

Children need the culture dish is prepared, use a sterile cotton swab or inoculating needle and swab the inside of your cheek. Very gently rub the swab over the agar in a few zigzag strokes and replace the lid on the dish. Children will need to let the dish sit in a warm area for 3-7 days before bacteria growth appears. Record the growth each day with a drawing and a written description. The individual bacteria are too tiny to see without a high-power microscope, but children can see bacteria colonies. Distinguish between different types of bacteria by the color and shape of the colonies.

You can follow the method of experiment 1, collect bacteria in different places with cotton swabs, such as mobile phones and doorknobs, and observe and record their growth. Alpha science classroom: How Can Bacteria Harm Us?

Alpha science toys know Some types of bacteria cause disease and sickness. These kinds of bacteria are called pathogens. They reproduce very rapidly, like all bacteria. These come in many forms and can cause illnesses from an ear infection to strep throat to cholera. They can get into our bodies via our mouth and nose or through cuts and scrapes. Some are airborne, others are found in food, resulting in food poisoning. Bacteria are also the cause of plaque buildup on our teeth, which can lead to cavities and gum disease.

Alpha science toys think Before the discovery of antibiotics, many severe bacterial diseases had no cure and usually resulted in death. Antibiotics work by destroying bacteria or inhibiting their reproduction while leaving the body’s own cells unharmed. After a time, some bacteria develop resistance to an antibiotic, and it will no longer be effective against them.

Mouthwash. Swab your teeth and gums and see how well toothpaste or mouthwash works against the plaque-causing bacteria on your teeth.

Band-aid. Some band-aids are advertised as being antibacterial. Test to see if they really work better than regular band-aids at inhibiting bacteria.

Water bottle. Is it safe to keep refilling a water bottle without washing it? Test a sample of water from the bottom of a water bottle that has been used for a couple of days and compare it to a sample from a freshly-opened, clean water bottle. You can also test to see if a bottle gets more bacteria in it if you drink with your mouth or with a straw.

Shoes. Do bacteria grow in your shoes? Is there a difference in bacteria growth between fabric shoes and leather? Do foot powders work to cut down on bacteria?

Toothbrush. Do bacteria grow on your toothbrush? What are some ways you could try to keep it clean? Mouthwash? Hot water?