The rainbow is the most beautiful. Do children want to have a visible rainbow? Today, Alpha science classroom will create out Amazing Floating Rainbow with children together by Amazing 9 Layer Density Tower. With the help of this magical physics experiments for kids, children will try new things with our famous "density column". Children will be able to learn how to stack nine layers of liquid on top of each other. This one alone looks really cool, but kids can also increase the difficulty and magic of it by making different solid objects "float" in the middle of all this cool-looking stacked liquid. What are you waiting for to feel the magic of science for you and your friends with this amazing density science experiment phenomenon!

Step 1: First, Put all the empty glasses on the table or flat surface. Now, measure an equal amount of each liquid and pour it into each cup.

Step 2: Add a large amount of green colorant to the cup with water, and then mix it with a spoon. Similarly, add blue colorant to rubbing alcohol. Therefore, children now have green water and blue rubbing alcohol to make them stand out in your 9-story density tower.

Step 3: Carefully pour the honey syrup into a glass vase, and then pour corn syrup and 100% maple syrup. Do not touch the side of the glass vase when pouring, to form a unique layer.

Step 4: Pick up the turkey cream and pour the milk and liquid dish soap separately, and then carefully place them in the glass vases. Children can also use turkey paste to place the rest of the liquid layer by layer on top of another. However, remember to let each liquid settle and separate before adding the next liquid.

Step 5: Loosen the bolts, cherry tomatoes, some beads, soda bottle caps, popcorn kernels, molds, and ping pong balls in the glass bottles. Children may need to push the cap with a straw to make it fill and sink. 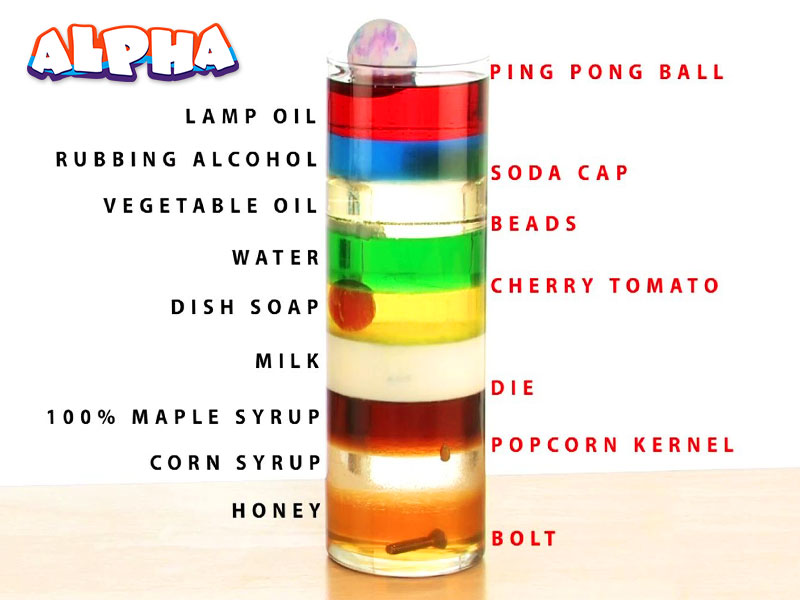 Finally, the 9-layer density tower made by the children is ready, which contains 9 unique liquid layers and 7 objects! Hurry up and share this magical magic with your friends!

Alpha science classroom shows children as the name of the 9 layer density tower physics experiments for kids says, this density is the secret behind the density tower. Therefore, the bottom has a higher density of liquids, such as honey, corn syrup, and maple syrup. Lamp oil, rubbing alcohol, vegetable oil and water are lighter liquids with lower density, and they manage to maintain a higher position in the tower. The same rules follow the objects floating in different layers of the density tower. The bolt has the highest density, so it sinks to the bottom. Here, the ping pong ball has the lowest density among all objects dropped in a glass vase.

Density is how much an object is compact. Yes, this may sound tough to understand. So, let's understand the same by answering this question. Whether a bag of 1 kg feathers or of 1 kg gold will be larger in size? Of course, the bag containing feathers will be larger because the density of gold is more than feathers. So, it is more compact than feathers.

Okay, In Alpha Science Classroom, the 9 Layer Density Tower physics experiments for kids was completed. This simple knowledge of Density science experiment activities can guide children to use different important objects in the Density Tower, to explore more knowledge. Or check out the Alpha Science Toys website for more amazing science experiment kits for kids and explore the bigger and more fun magic world of science.